The prompt for 52 Ancestors this week is Work.

This week I wrote down the occupations of many of my ancestors. Some interesting patterns emerged, with occupations often being passed down for generations. There is a cluster of doctors over several generations in my Eve/Carmichael line; there are ancestors that have occupations involving ships from several lines that come out of Charleston, South Carolina; flax growers and linen weavers from two lines that come from Northern Ireland; and protestant ministers peering out from several lines. By far the most popular occupation is farmer/planter/plantation owner. And some unique ones include cooper, gun powder maker, sheriff, and mail carrier.

Among all these is one ancestor who stood out not because of the job held, but because she was the only woman on my list. She not only had regular jobs in the late 19th and early 20th centuries, but she was the breadwinner for the family. She was my 2nd great-grandmother.

Augusta Wilhelmina (Roth) Eigenmann was born 10 November 1865 to John Adam Roth and Eleanora Wissig in St. Louis, Missouri, joining older sister Lissette. Both John and Eleanora were immigrants from Germany. John served in the American Civil War in the 1st Missouri Calvary. He passed away 23 November 1867 in St. Louis. Following John’s death, Eleanora married Frederick Kunz, a Swiss immigrant, in 1871 and they had three daughters.

Augusta is listed on the 1880 census as a seamstress. She married Fredreich Andrew Eigenmann 10 November 1883. Fredreich immigrated from Germany in 1881. He worked was employed as cooper and also worked odd jobs.

At some point, Augusta trained as a nurse. Most often she worked for families as a caregiver for their older relations. She would live in the family’s home or nearby providing for the needs of the individuals in her care. Augusta’s family moved according to where she could find work 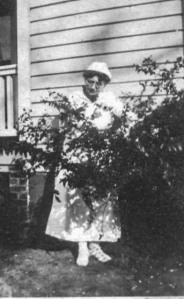 Augusta in her uniform, undated photo

Augusta and Fredreich had four children. The oldest child was a son they called Bertholde. He was born in San Antonio, Texas in 1885 and died 4 years later in St. Louis. The next three children were born in St. Louis in 1889, 1891, and 1894.

The family is found in Macon, Georgia in the 1900 census, Savannah, Georgia, in a 1902 city directory and then in Atlanta, Georgia, in 1906 in the city directory. Shortly before June 1909, the family is living in Abbeville, South Carolina, when Augusta and Fredreich’s oldest daughter, Eleanor Frieda Charlotte Eigenmann, married William Shillito DuPre (my great-grandparents). From newspaper accounts, announcing the engagement, Eleanor is described as a recent arrival to Abbeville. Another article describes the wedding as quite an elaborate affair, leading one to conclude that Augusta made enough money to provide a comfortable life for her family.

Fredreich would suffer an accident in 1910 that would necessitate placing him in a mental hospital in Georgia the following year. In 1912, she is listed in the Atlanta city directory.

Augusta, holding my grandmother, with Eleanor and her other children, ca. 1920

Augusta also attended the birth of at least one of her granddaughters. In a book about infant care, my great-grandmother, Eleanor, listed Augusta as one of the nurses attending the birth of my grandmother, Bettye, in 1919.

Augusta continued working as a nurse in Abbeville and Atlanta. In 1932, she submitted a request to the Georgia Warm Springs Foundation to work as a nurse. The foundation was a center for “the study and after-treatment of poliomyelitis (infantile paralysis)” of which President Franklin D. Roosevelt was the president of the board of trustees. Her request was declined as all positions were full.

In later life, Augusta spent time with her children in South Carolina and Florida. She died in Abbeville, South Carolina, 6 December 1936 at the age of 71.

5 thoughts on “A Woman at Work”