This week’s prompt for 52 Ancestors is Sports. When considering this topic, I mostly drew a blank. My mom was an elementary PE teacher for a little while and she once won a racquetball tournament, but I didn’t feel I had a lot to write about. While thinking about possible topics, a photo came to mind of me and my grandma from my college days. As I considered sharing the photo, an idea of future grandchildren finding the photo percolated. Here is the result:

I am spending the week with Grandma at her home for my 15th birthday. I love being here. Her home is so full of love and memories. Do you remember when we used build forts in her living room and she would climb in and we would make flashlight shapes on the ceiling and read all her books?

We have been taking walks and eating yummy food and of course talking about family history. She has been taking me through her files and albums and telling me family stories. She has done sooo much work, we are lucky to have all of this.

We got to one album I hadn’t seen before. Grandma seemed to smile to herself when we found it. It was from her college days when she was on the rowing team. Did you know she was a rower! She told me about the workouts and the early mornings on the water. She told me about the life-long friendships that developed. She said that at the start of a race, as they waited for the the ref to call the boats to attention, she would put her fingertips in the water and gently move them back and forth.

Her pictures were so fun: lots of pictures of friends and boats, sunshine and water. But this picture was the one she looked at the longest: 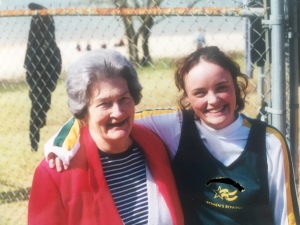 This is of her and her grandma, Bettye. For spring break her novice year, they went and trained at Clemson University. Her grandma was living there so she got to see her a few times that week. One time when they were running the 2 miles from the hotel to the boathouse, her grandma, aunt, and cousin happened to drive by. They pulled over and she paused from the run to give them hugs. She talked about Clemson as a second home during her growing up years, how it was a constant for her when her dad was in the army.

She took the picture out of the album and put it in a frame on her bookcase.

I hope you can come visit grandma and hear her stories. This week has been so special. I hope you are well.