Rainbow Row in Charleston, South Carolina. photo by Something Original

This week’s prompt for 52 Ancestors is “The Old Homestead.”

My grandmother loved Charleston, South Carolina. She even had a Rainbow Row (a row of colorful houses in Charleston) wallpaper border in her kitchen. One year my aunt gave grandma a print of a watercolor of the ancestral family home in Charleston. At the time, it was a quaint inn called Maison DuPre. There was, I think, discussion of the house and the watercolor, but nothing stood out to me at the time, except maybe the realization that I had French ancestors. My grandmother placed the print on her mantle. 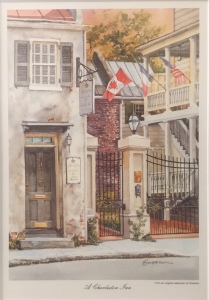 I don’t know if it was Charleston’s proximity to the beach or the deep family connections to the city that my grandma loved more. My 7th, 8th, and 9th great-grandparents, the DuPre family, immigrated to Charleston in 1685 from France, via England. They were French Huguenots who fled after the Edict of Nantes was revoked, which allowed the open persecution of Protestants and the destruction of their churches and schools.

The DuPres settled in Charleston and were given land to live on and are listed as early members of the parish of St. Thomas and St. Denis. Some of these ancestors attended church at the beautiful Pompion Hill Chapel on the bank of the Cooper River. The DuPres continued to live in the Charleston area for many generations.

My 5th great-grandfather was Benjamin David DuPre. He was born in Charleston, married Mary Anne McClellan there in 1790, and worked as a tailor at 78 E. Bay Street, according to the 1796 Charleston Directory. Benjamin built what would later be called Maison DuPre around 1803. It was built in the prevailing Federal style of the time. The family lived in the house until 1813, when it was sold to Thomas Lesesne. Benjamin moved his family to Pendleton, South Carolina sometime after that.

We have visited the house several times since I first learned of it. We go by it every time we visit family in Charleston. One of the first times we visited, it was still Maison DuPre. The property is entered via an iron gate at the back of the Benjamin DuPre house that leads to a brick courtyard enclosed by the house, a carriage house, and another building. The owners at that time were distant relations and invited us to come into the ground-level kitchen and dinning area. I don’t remember much other than the space had brick walls and was very dark.

One of my boys visiting the Benjamin DuPre Home.

A few years ago, the house was transformed into a boutique inn. After the new inn opened, on a visit to Charleston, we stopped by. We told someone that we were descendants of Benjamin DuPre and they happily toured us through the house. The tour started with climbing the steps to the large veranda that ran beside the second floor, lined with hurricane lanterns. The common rooms on the main level were bright and airy, the guest rooms looked comfortable, and the ground-level kitchen and dinning area felt inviting.

While I don’t know what it looked like or felt like when the Benjamin DuPre family lived there, it was delightful walking through the space and knowing that they had once been there and that the house was being taken care of. And even though it has changed names, I always remember the watercolor and call it by the name I first knew it by: Maison DuPre.

The Benjamin DuPre House when it was Maison DuPre: 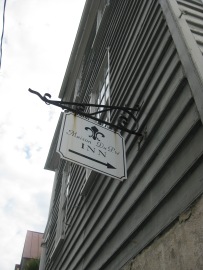 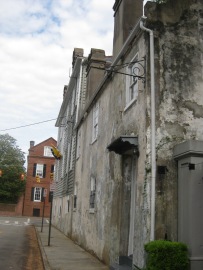 In the common area

In the common area