I have been entrenched in Irish family history. My husband and I are visiting the Emerald Island this Spring and are carefully climbing every Irish branch of our family tree.

My branches are concentrated in the north and in the south. The farmers, a rebel, and women of great courage came from two northern counties, Antrim and Londonderry, and the gentleman, shipbuilders, and Quakers came from southern counties of Cork, Waterford, and Tipperary. All of these family intermingle and intermarry in Augusta, Georgia, and neighboring Edgefield County, South Carolina, during the 19th century. 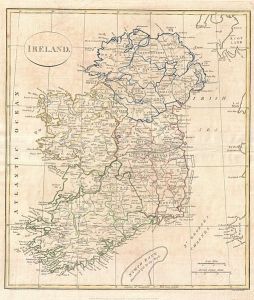 As I have been researching one of my County Cork families, the Pritchards, I have benefited from a kind distant relative and her work on this line, strangers found on genealogy websites, and distant relatives that died decades ago. I’ll explain:

For those that don’t know, in 1922, during the Irish Civil War, the Public Records Office was used as munitions block for the Anti-Treaty forces. The Free State army attacked the PRO causing multiple fires, some of which reached the munitions block, resulting in an explosion and the destruction of hundreds of years of records. At a genealogy conference, a presenter told a story of pieces of census records floating from the sky. People collected the fragments and returned them to the local government.

While most things were lost, records can be found in various places, but there are lots of holes. It’s hard to go back past 1800 and sometimes you’re lucky to get there. This is where I was, looking for Pritchards prior to 1740 in Cork. In my search, I was told of a book about my ancestors that was published in 1986. The book had lots of good information, taking my tree back several generations. As I studied the materials, I noticed two names, Mary B. Poppenheim and Motte Alston Read. These individuals are distant relatives of mine that died in 1936 and 1920, respectively.

As I thought about these two individuals and learned more about them, I realized Mary, and possibly Motte, must have gone to Ireland before the fire in 1922 and seen the original records from the churches and local governments. I’m grateful that they shared this same passion for genealogy and family history, that they shared their research with others, and that others published it.

This has happened several times to me. So don’t be afraid to ask others for help. Reach out to those cousins and strangers on family history sites, you’ll never know who might hold a missing link. And then consider writing down, documenting, and sharing what you’ve learned.

PS. Ancestry tells me I’m 25% Irish & Scottish, so some of that Irish luck may have trickled down to me!

One thought on “Luck of the Irish”