My maternal grandparents married each other twice.

Rayford Haney Wilson, or Ray, was born to Lafayette Russell Wilson and Ida Lou Verna Wakefield on 15 October 1915 in Nauvoo, Walker County, Alabama. Ray was the fourth of six children and the second boy. Lafayette worked at different times as a reverend,  farmer, teacher, and government worker. In later census records, the family can be found in the towns of Zion and Jasper. After Ray completed high school, he got a job with the Tennessee Valley Authority (TVA), a federally owned corporation created to develop the economy in the area during the Great Depression. He was assigned to a dam building project as an accountant near Guntersville, Alabama, about 100 miles from his home. 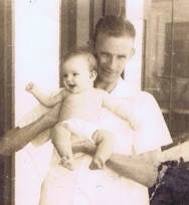 Lorene
Not far from Guntersville, lived Alice Lorene DeArmond, who went by her middle name. She was born 15 January 1919 to Solomon DeArmond and Anna Belle “Daisy” Ledbetter in Hebron, Marshall County, Alabama. She was the fourth of eight children. Solomon was a farmer and a maker of moonshine. Daisy passed away when Lorene was 13 years old. She completed school through the 7th grade. Before 1940, she was working in a beauty shop in the town of New Hope.

Ray and Lorene met and were married 15 April 1940 in Guntersville. In December, their first child, Ray Jr., was born. Sadly, he died three hours later. Ray and Lorene would have five more children over the next 13 years

Ray (on the left) in Dillon, Colorado.

Ray continued his work as an accountant for construction projects for several construction companies, including Brown & Root. The family would move to various places across the United States and Puerto Rico for Ray’s work. Ray would also go to Australia and England on his own.

Ray and Lorene had lots of ups and downs. In 1973, Ray moved to Alaska for work, leaving Lorene in Houston, Texas. After Ray’s move, Lorene filed for divorce.

While in Alaska, Ray met Pauline, a beauty shop owner who was a widow with two grown children. They married in October of 1974 in Anchorage, Alaska, and moved to Houston the following year. Pauline later got sick and died 2 August 1978.

Ray and Lorene remarried 11 October 1978. Ray had not stopped loving Lorene and it’s thought that Lorene regretted divorcing Ray. Their re-union led to several years of happy companionship until Ray passed away 13 September 1990 in Houston. In the following years, Lorene spent her time living with her children. She passed away 30 October 1997 in Houston and was buried next to Ray.

One thought on “Re-Union”