This may seem like a mostly unrelated list of people, but I assure you, the connections are deep and sometimes require pen and paper to understand.

This week’s topic for #52ancestors is “In the Census.” For this topic, I chose this snippet of the 1850 census taken in Augusta, Georgia.

John Bones and Mary (Brown) Bones were married as well as first cousins. Their grandparents were John Adams and Elizabeth Boreland, of Ireland. John Bones was the son of James Bones and Mary Adams. Mary (Brown) Bones was the daughter of James Brown and Elizabeth Adams. John immigrated from Ireland to Georgia with his parents and siblings in 1810. On a visit back to Ireland in 1835, he married Mary, and returned with her to Georgia.

James and John Brown were Mary’s brothers. John Brown immigrated to Georgia around 1847. He was in business with his brother-in-law. They owned a hardware store called Bones, Brown & Co. We haven’t found an definite immigration date for James.

Mary was John’s second wife. His first was Maria Barney Fitzsimons Eve, daughter of Oswell Eve and Aphra Ann Pritchard. Maria’s sister was Martha Henrietta Eve and she married Gilbert Longstreet. They had many children, including Hannah Longstreet. Hannah and her sisters were all sent to live with their aunts when their parents moved  deep into the country for Gilbert’s work as a mail carrier so the girls could continue their educations. When Maria died in 1833, the children continued to live with their aunts and Gilbert went to Texas. Hannah was the niece of John and Maria (Eve) Bones. They also adopted her.

Here is a sketch I did of these relationships: 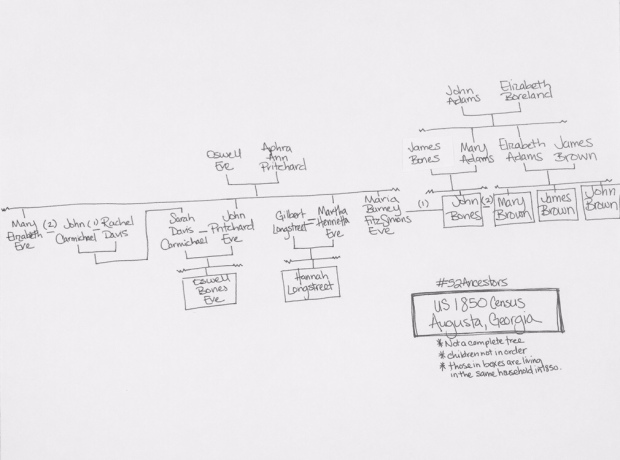 It’s fascinating how these families intermingled and intermarried. I have done quite a bit of research on this branch, taking time to note the dual relationships that happen among these families. There are a lot. This part of my tree is more of a family web.

While none of the people in this census record are in my direct line, their siblings or parents are. Later in our tree, these lines become connected again when a Carmichael/Eve/Longstreet descendant (James Hammond Carmichael) marries a Bones descendent (Elizabeth Seabrook Lake).