The topic this week for 52 Ancestors is “Where There’s a Will.”

John Strong Adams dangled out on the edge of a branch of our family tree, an orphan with no connection except to his wife. He married my 5th great-aunt, Sarah Eve, and worked for the husband of my 6th great-aunt, Christopher Cashel Fitzsimons. He came from Randalstown, County Antrim, Ireland and later worked as a commission merchant in Charleston, South Carolina. John Strong Adams and Sarah Eve were married in 1803 in Augusta, Georgia, and called their home “Adam and Eve’s Paradise.” It is said that he had beautiful handwriting and had excellent taste in literature. He died while visiting Randalstown with his wife in 1812 and a memorial to him in the family cemetery in Augusta, Georgia, said he was buried in his father’s grave in Randalstown.

But searches for more information about him and his family had not brought up much more than marriage or property records in Georgia and South Carolina and a line in a Belfast newspaper noting his death. I also had suspicions that he was somehow related to the Adams branch of our family tree: they were from the same county in Ireland, had places in that county in common, both he and descendants of my Adams family end up in Augusta, Georgia, and both marry into the Eve family.

Recently, I decided to click on the search button you find on a person’s page in Ancestry. I was pretty sure I had done this before, but to my surprise, a few results I had never seen popped up, including two entries for his will, one in Philadelphia County and one in New York County. Both list the correct people and place: his wife, Christopher Fitzsimons, property in Randalstown, and the will was created in Charleston, South Carolina. 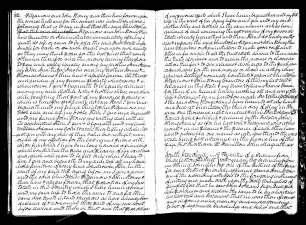 Happiest of all, the will mentions his mother, Ann Adams, his sister, Ann Eliza, his brothers, James and Thomas, and his uncle, William Adams. Suddenly, John Strong Adams went from being an orphan to having several family members. It is a pleasure to see these additional branches in our tree.

The mention of his Uncle William is important because my Adams family relatives also have an Uncle William who lives in Randalstown. While this doesn’t absolutely prove the link between the families, it is a step in that direction.

It can also be surmised from the will, which was written in 1809, that his father had died before then as John leaves the property in Randalstown that was “bequeathed to [him] by [his] father” to his mother and sister.

In other items in the will, John leaves 1/3 of his estate, “real, personal and otherwise,” to his “dear and beloved wife Sarah Adams.” He also leaves all his household slaves to her as well as their household furniture. The rest of his property is to be put into trust by Christopher Fitzsimons and John Stoney and sold. The result of the sale is to benefit his mother and siblings equally. He leaves Christopher Fitzsimons his bookcase and all the books in it. He leaves John Stoney his “writing desk and all its apparatus.” He leaves his Uncle William his gold watch. Of these three men, John writes,

These trifling articles I do not give with any view of their value but as slight memorials of my affection for the last named persons with whose friendship I have been long honored[,] a friendship that constituted the pride and pleasure of my existence and which will cease to be felt only when I cease to live.

Even though the will answered some questions, more questions have come up: