The prompt for 52 Ancestors this week is Going to the Chapel.

My 6th great-grandparents, Oswell Eve and Anne Moore, were married 274 years ago this week in Philadelphia, Pennsylvania’s Christ Church.

Oswell, it’s believed, was born in Surrey, England, 1 February 1721 to Oswell and Sarah Eve. He and his twin sister, Sarah, were the oldest, and they had 3 brothers and 2 sisters. The earliest mention of him in America is around 1740. Oswell was a sea captain, owning or partially owning up to 25 ships. Later his occupations included gun powder maker, chandler shop owner, ship pilot, and river surveyor.

Ann was born in Philadelphia, Pennsylvania, 15 February 1724 to William and Martha Moore. William and Martha were both Irish Quaker immigrants. They immigrated separately, but their families seem to have known each other in Ireland. Ann had three brothers and a sister. 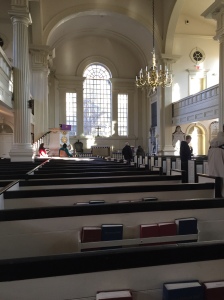 It is not known how Ann and Oswell met, but they were married 2 June 1744.  Since Oswell was not a Quaker, Ann was disciplined for marrying outside the community. Ann’s disfellowship is recorded in the Quaker meeting minutes for 28 June 1745:

Whereas Ann Eve late Moore was educated amongst us the People called Quakers & profest to be of our Religious Society hath for want of a due regard to the good Order established amongst us married a Person of another Persuasion for which she hath been tenderly dealt with but refuseth to condemn her breach of Discipline. These are therefore to Testify against her the said Ann Eve as one not in Unity amongst us until she is brought to a Sense of her disorder & condemn the same to the Satisfaction of this Meeting.

It seems that their marriage was one of love if she was willing to stand up to such condemnation. She regained fellowship with the Quakers later. Some of her children’s deaths are recorded in the Quaker records and some of the children attended the Quaker school. Five of their 13 children would live to be adults, including my 5th great-grandfather, Oswell Eve. 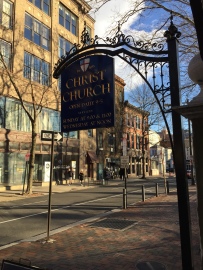 Oswell would be away for years at a time on his ships. As he got older, he stayed closer to home, and he developed a process for making gun powder that caught the attention of the Continental Congress. The congress sent Paul Revere and others to learn the process so other mills could be established in other places. Oswell agreed but hurried the men through the tour so they couldn’t make a comprehensive study. Oswell was commissioned to provide gunpowder for the Continental Army. It was later discovered that he was also making gunpowder for the British. Oswell fled Philadelphia as the Americans took the city from the British and went to New York City. Ann soon followed and Oswell captained a ship of loyalists to the Bahamas. Oswell was declared a traitor by the Americans. Oswell and Ann lived the rest of their lives in the Bahamas.

I went to visit the church in Philadelphia in the spring of 2017. I had been entrenched in the research for this family and was excited that we had a few minutes to go in. The church itself is steeped in history, it being the church many of the Founding Fathers and early presidents attended. Its cemetery hold the remains of many notable people including, Benjamin Franklin and Dr. Benjamin Rush, the later is rumored to have been engaged to Oswell and Ann’s daughter Sarah.

Upon entering the church, I couldn’t contain my excitement. I told the man working in the gift shop about my excitement in being in the place where my ancestors had been married. He asked the name of the ancestors and as soon as I told him, he replied, “oh, the traitor!” I was surprised and pleased at my ancestor’s notoriety.

7 thoughts on “A Person of Another Persuasion”